After purchasing my Naval Orange Tree, I returned to Sledd Nursery to get another one as a gift for a friend.  The nursery had gotten another citrus shipment, and had several Ruby Red Grapefruit trees, laden with fruit.  I got a bit weak in the knees upon sight of one with eight nearly ripe grapefruits on it.  The mental justification began, and it came home with me.   During one of the rainy days this last weekend, I pulled down my How To Be A Domestic Goddess cookbook, by Nigella Lawson.  Like magic, it opened to the page for Pink Grapefruit Marmalade.  I was immediately attracted to this recipe, because it called for boiling the grapefruits, whole, for two hours, which I thought would take away some of their bitterness.

First, I ate grapefruit to get the taste of it before proceeding.  Then, doubling the recipe to use all of my grapefruits before the (now upon us, freeze), I put the fruit into boil. 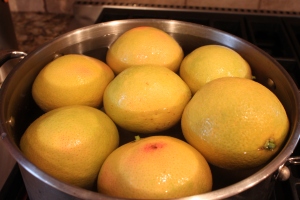 After two hours, they became very soft.  I went out to run errands while they cooled.

Once cooled, I started slicing and chopping the fruit, and at first forgetting to remove the seeds.

I was excited by the color, and had an inkling of an idea that it was going to turn out pretty.  I chopped the pieces smaller than I did with my orange marmalade, based on comments by the family members I tested it on.  These were softer from the boiling as well.  Once chopped, it all went into a pan with the organic sugar and lemon juice, and heated on low until the sugar dissolved.  Once the sugar was dissolved, I turned up the heat and simmered until it passed the frozen spoon test. 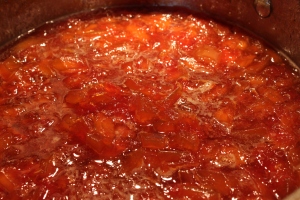 I took Nigella’s suggestion, and put in a glug of rum, for good measure.  Then I put the mixture into steralized, hot jars, then into a waterbath for 10 minutes.  The end result is such a gorgeous color, I couldn’t be happier.

The marmalade set up appropriately, and when tested the following day on a cracker with some Full Quiver Neufchatel, it was delicious.  I think the boiling eliminated a lot of the bitterness from the peel, and I will use this method now on for all of my citrus marmalades.

G and S Groves has oranges, grapefruits, lemons and limes for sale now.  You can order the oranges and grapefruits through http://www.jbgorganic.com for pick up at just about all of the farmer’s markets and at the farm.  Get your marmalade on!