I only eat fruits and vegetables from my garden or local farms, so everything I eat is in season.  One of the beautiful things about eating seasonally, is the anticipation for things I haven’t had since their last season.  I can think of few things as delicious as freshly harvested Sweet Corn.  When I saw that Boggy Creek Farm was to have sweet corn at their market, I went early to the farmstand to snag some.  They hadn’t harvested any when I got there early, so Carol Ann took me to the fields to harvest some with her.  The ultimate test of when the corn is ready, is to taste it, raw, right in the field. It was tender and delicious and I came home with several ears.

I already had something in mind for it, Mexican Street Corn Salad.  When I searched for a recipe I settled on one from Serious Eats.  I had never heard of Esquites before, but it looked like exactly what I wanted, and I had jalapeños and cilantro from the garden to use.

I cut off the worm end of the corn,  removed the husks and picked off the silks.

I would have loved to grill the corn to get it a bit charred, but alas it was raining.  I scraped it off the cob, and cooked it in a hot pan until slightly charred. 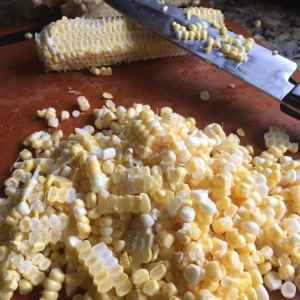 The recipe called for more charring, but the starches had begun to stick to the pan, so I pulled it out,  and added salt and pepper.

I doubled the jalapeños, because I had fresh garden peppers to use and wanted more heat.

I mixed in some scallions, lime juice, mayonnaise, cilantro and then pulled out the cheese.  The recipe called for Cotija or Feta.  Alas, I had gotten Queso Fresco instead of Cotija.  The sharpness of Cotija was exactly what this needed, but I made do with the milder Queso Fresco, because that was what I had.  I finished it off with some Springdale Farm Smoked Pepper Mix, which is good on everything.

The result was still delicious, but the proper cheese would have made it outstanding.  This salad even better the second day, because the heat from the pepper had settled in.  Sweet corn will be around for another few weeks at the farmstands and farmer’s markets.  I highly recommend this recipe, and can’t wait to try it again with the correct cheese. 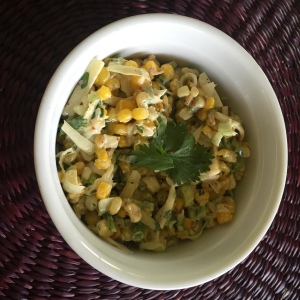